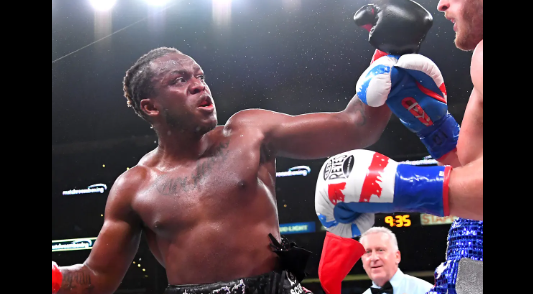 A YouTuber boxer takes on two fighters in one night as he returns to the ring after more than 1,000 days on the sidelines. He takes on rapper Swarmz, who himself filled in for the injured Alex Wassabi, and Luis Alcaraz Pineda, who fills in for Nikolov.

Pineda has won two of his seven pro fights and lost his last four. KSI, who also claimed to have fired his matchmaker for drafting in Nikolov, said of his new opponent: “He hasn’t lost as many times as Ivan, he’s Mexican and he’s younger too. I know a lot of people had a go at me because the other one was around forty.”
KSI’s decision to fight Nikolov sparked controversy when eagle-eyed fans spotted a “White Power” tattoo on the fighter’s stomach. Several other white tattoos were revealed, including the words “Blood & Honour” on his arm, the name of a neo-Nazi skinhead group.

Nikolov took to social media to deny the allegations, saying: “I have seen recent news regarding tattoos referring to ‘white power’. This has absolutely no relevance to an outdated opinion and simply refers to my own belief in my strength and power as athlete.
“I have no criminal record or dealings with the police regarding any racial issues. Now I understand how the tattoo can be misinterpreted, but I passionately distance myself from any other meaning it may have other than representing my strength as a competitor.”

But a previous opponent also noticed his ink, Daniel Blenda Dos Santos had a problem with them when the pair fought last April. After winning by knockout in the first round, dos Santos said: “When I saw his tattoos, some of them were racist, I wanted to hurt him. I’m not disappointed that I had [the short fight].